Tis’ the season of giving, and this holiday TSE would like to share how programs within the state of Florida are giving back to the manufacturing industry. We have partnered with two organizations that do so much for us as a company and the community as a whole.

Many don’t realize that Florida ranks in the nation’s top 10 states for manufacturing with more than 18,000 manufacturers employing more than 317,000 workers*. We aren’t just palm trees, oranges, and Mickey Mouse. In fact, the Tampa Bay area, which is home to TSE Industries, has the largest concentration of manufacturers in the State. But Florida’s manufacturing companies are facing a shortage of skilled workers. 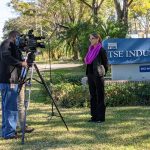 That’s why TSE has chosen to partner with AmSkills. Their mission is strengthening Tampa Bay area communities through workforce training and apprenticeship opportunities for adults and Veterans, thus creating a direct pipeline of candidates who have received hands-on training for high-demand manufacturing careers. Since its partnership with AmSkills began in 2018, TSE has been fortunate enough to welcome 11 graduates from their various training courses into its family. Our Human Resources Director is diligent in getting the word out to other manufacturers in the Tampa Bay area. She and her team at TSE are often attending workshops and boot camps where they discuss the benefits of becoming a collaborative partner with AmSkills and what the organization can do to provide companies with a continual supply of talented, skilled workers. 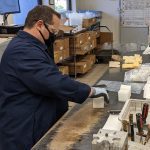 TSE has welcomed the most graduates from AmSkills’ programs, so this December Pinellas County asked TSE to take part in a video highlighting AmSkills’ Talent Pipeline Management Collaborative. A win-win situation for both TSE and AmSkills, the video will be shown at an upcoming Pinellas County Commissioners event to promote the collaboration’s success and encourage other manufacturing companies to join. In the video, four TSE employees shared their stories, tales that included a homeless Veteran who had fallen on hard times to a young adult with a troubled past, all four went through a manufacturing boot camp with transferable skills and landed jobs at TSE. They are proof that AmSkills’ training programs work and that there are companies ready and willing to hire – especially during a pandemic.

TSE’s work with the community continues through its partnership with Pepin Academy and its efforts to introduce individuals with mild learning disabilities to the world of manufacturing. The goal of the Academy is to create an environment where individuals with cognitive challenges can maximize their potential in a positive therapeutic space and prepare them to meet the social and emotional challenges in everyday life without difficulties. TSE is the first manufacturing company to build an alliance with Pepin, allowing their adult students to gain valuable skills in the workplace. So far, TSE has welcomed two Pepin students and their Pepin coach to the TSE family, with many more on the horizon!

Tis’ the Season of Giving
We are so grateful for these two organizations and the opportunities they bring to the Tampa Bay community. With their programs, 13 individuals have been given an opportunity to have successful careers and experiences at TSE. It is so rewarding for TSE to be involved as well. We encourage every company to become involved with organizations that provide services similar to AmSkills and Pepin that may operate in your own backyards. They rely on us, just as we rely on them.

*According to the Florida Economic Development Council

This website uses cookies to improve your experience while you navigate through the website. Out of these, the cookies that are categorized as necessary are stored on your browser as they are essential for the working of basic functionalities of the website. We also use third-party cookies that help us analyze and understand how you use this website. These cookies will be stored in your browser only with your consent. You also have the option to opt-out of these cookies. But opting out of some of these cookies may affect your browsing experience.
Necessary Always Enabled
Necessary cookies are absolutely essential for the website to function properly. These cookies ensure basic functionalities and security features of the website, anonymously.
Functional
Functional cookies help to perform certain functionalities like sharing the content of the website on social media platforms, collect feedbacks, and other third-party features.
Performance
Performance cookies are used to understand and analyze the key performance indexes of the website which helps in delivering a better user experience for the visitors.
Analytics
Analytical cookies are used to understand how visitors interact with the website. These cookies help provide information on metrics the number of visitors, bounce rate, traffic source, etc.
Advertisement
Advertisement cookies are used to provide visitors with relevant ads and marketing campaigns. These cookies track visitors across websites and collect information to provide customized ads.
Others
Other uncategorized cookies are those that are being analyzed and have not been classified into a category as yet.
SAVE & ACCEPT
Powered by